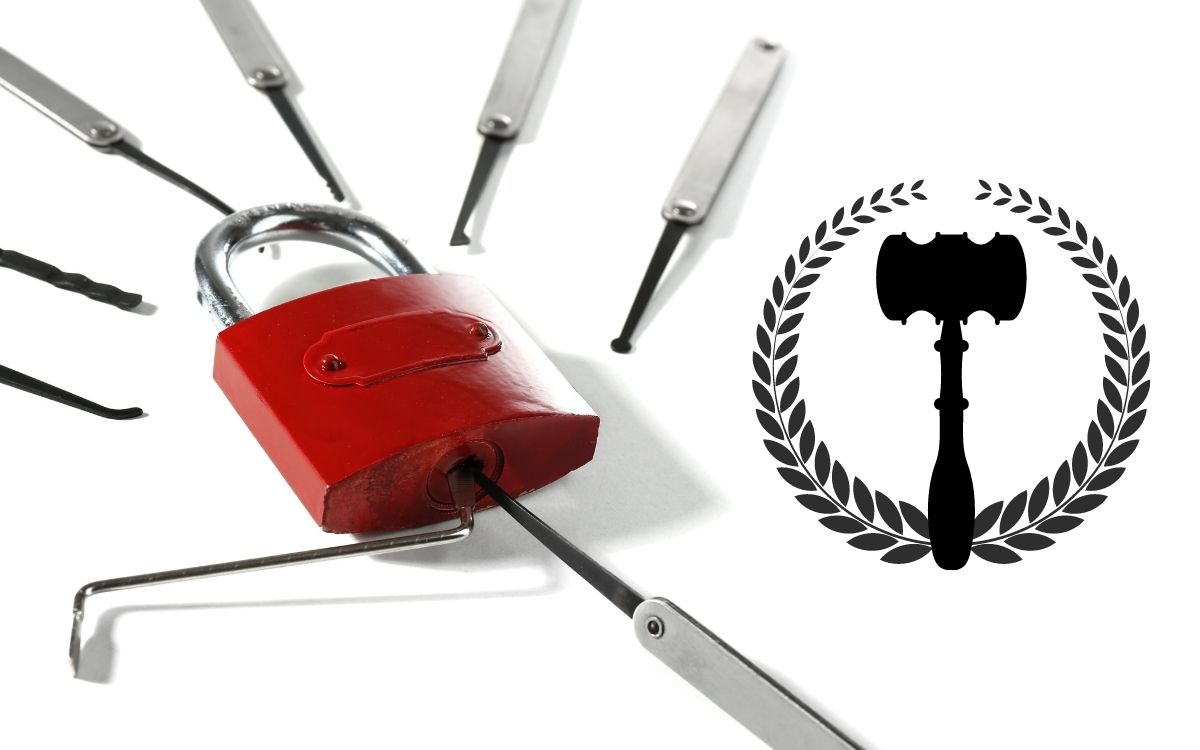 Lock picks work by pushing the pins in a lock-up one at a time until they all line up with the shear line so the lock core can rotate. This is done by applying rotation force to the core of the lock while pushing up the pins one at a time with a lock pick in order to hold them in place. Once all pins are in the correct position the lock will open.

In the movies, they make lock picking look so easy. A character kneels in front of a door. Pulls out a set of tools. Inserts them. Fiddles the tools, and not surprisingly, the door creaks open.

Simultaneously, apply rotational tension to the cylinder as the key pins are individually lifted and set at the shear line of the bible. That’s what lock picking is doing as it attempts to mimic the mechanics of the proper key.

Obviously, we have jumped the lock-picking gun and gotten ahead of ourselves. We need to examine the inner workings of a lock and key.

When people imagine a padlock, I believe the first thing to come to mind is a standard Master Lock, something definitely not on the LockPicking Lawyer’s highest-reviewed locks. These are pin tumbler locks and the most common type of padlock.

These locks appear simple and work efficiently while they have multiple moving parts that the user rarely sees.

How Does a Lock Work?

Insert the correct key and turn. Simple as that. The mechanics, however, are so much more.

Parts of a Padlock

As the cam is rotated, the turning motion pushes each of the latches inward and opposite the direction, their springs are pushing.

Let’s quickly recap the basic flow of a lock and key:

The proper key pushes the pins to their positions aligning with the shear line. As you can see in the diagram above.

The key then freely rotates the plug.

The cam forces the latches into the lock body.

The latches disengage from the shackle.

The shackle springs the shackle free of the lock body.

Those are the basics of the pin tumbler lock, but now we need to figure out how to open it using lock picks.

How do Lock Picks Work?

Lock picks are used to push the key and driver pins up into their correct positions inside a lock, one at a time while turning the core of the lock to hold them in place.

This mimics what a key would do inside the lock, being that a key will push all the pins up to their correct positions all at once allowing the core of the lock to turn.

As lockpickers, we use these flaws to our advantage.

There are plenty of flaws when it comes to locks but we are going to focus on those that allow us to pick a lock.

As described earlier, the “straight” line of pin chambers containing the pins is the weakness we are aiming to exploit when picking a lock.

High-quality locks are constructed with improved machinery with the goal of minimizing the flaws.

Ironically, some poorly built cheap locks may be challenging due to their poor construction.

The Mechanics of Lock Picking

The smallest errors of pin chamber alignment allow us as lock picks to identify the binding pin(s).

When lock picking, as the plug is rotated with the tension tool there is a pin that is the initial obstruction. The other pins will likely move more freely.

Upon setting the binding pin, we may move along the pins and test the others by feel to identify the next binding pin.

With all of the driver pins set above the shear line and the key pins freely below the shear line, the plug will rotate to the open position.

As a lock picker repeatedly picks a lock they will get familiar with it’s internal workings.

Frequently, you may hear lock pickers use the words “binding order”.

The binding order of a lock is the flow best suited for setting the pins of a specific lock.

This makes for easy picking of a specific lock, when one knows the order of the pins that are to be set. In order to avoid this “problem”, lock sport hobbyist will get multiple locks of the same lock model and work their way through these, including the legend himself, in order to approach each lock as if for the first time.

Given the right tools, time and skill, any lock can be picked.

In this article, we described the method and mechanics utilized to pick open a padlock by taking advantage of manufacturing flaws.

In future articles we will identify other methods of picking a padlock as well as the approach to those other lock picks out there.

Thanks to The Engineering Mindset, LockWiki, and Jared Owen’s video as being great resources of information. The LockPickingLawyer uses many tools in his videos but there are some that are much more common than others. We will break down the tools he uses most commonly for each different type of lock that he picks. But more importantly, we will show you where you can get them.  LockPickingLawyer’s Lock Picking Tools Other… If you are looking for some practical and quick ways to break through your combination lock, then congratulations! You are already at the right place. In situations where you’re locked out, the few hacks that you think of are; to either cut the lock, break the door, or try every possible combination you can. But,… The key to getting better at any task is practice. But unfortunately, when it comes to lockpicking, there is a large number of locks out there that are marketed as practice locks, and it can be a little daunting trying to decide which ones to get, which ones will be useful, and which ones should… In early 2000, Master Locksmith Zhi Qin Li in Hebei province China developed a series of tools that revolutionized the automotive locksmithing industry. Prior to the invention of the tool, a locksmith called out to All Keys Lost (AKL) job for a car would have an extremely difficult time, needing to first gain physical entry… Bump, bump, bump, and we are in. It can be just as easy as when a lockpicker uses the “bumping” technique and a bump key to open a lock.  Bump keys are another tool in a lock picker or locksmith’s tool kit. Knowing what to look for when buying a bump key is essential, as…